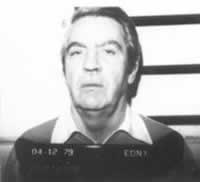 Jimmy Conway is a fictional gangster portrayed by Robert De Niro in the 1990 Martin Scorsese mob classic Goodfellas. Conway is based on real-life mobster James Burke, whose mother is identified in official records only as “Miss Conway.” The character’s name was changed to Conway after Burke’s daughter Kathy allegedly demanded $100,000 from the production company for the use of the name “Jimmy Burke.”

In the film, Conway (also known as “Jimmy the Gent”) masterminds the infamous Lufthansa Heist then arranges for the murders of his collaborators, though there is some debate about whether or not Burke was genuinely responsible for the killings. The actual 1978 heist, for which the real Burke was most likely responsible, was at the time the largest American cash robbery in history.

Fast Facts:
1. AKA: Jimmy the Gent, The Big Irishman, The Irish Guinea
2. De Niro won the New York Film Critics Award and was nominated for a BAFTA for his performance
3. Burke has also been portrayed by Donald Sutherland in The Big Heist and John Mahoney in The 10 Million Dollar Getaway
4. April 13, 1996: Burke died in prison from lung cancer

Memorable Quotes:
1. “Look at me, never rat on your friends and always keep your mouth shut.”
2. “You insulted him a little bit. You got a little bit out of order yourself.”

← Crooked Jaw – Crooked Jaw Clothing and Life Belt in Shark Tank
Big Brother 11 Episode 17: Will They Address All of The Gossip Tonight? →