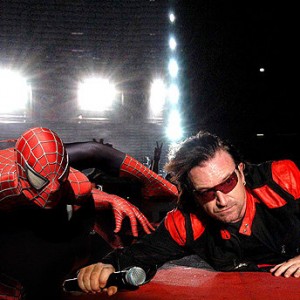 The U2-penned musical “Spider-Man: Turn Off the Dark” finally opened for preview performances this past weekend. And, by all accounts, the musical’s inaugural show, staged at the Great White Way’s Foxwoods Theater, was an even bigger disaster than critically loathed “Spider-Man 3” movie. As the New York Post so eloquently put it in today’s review, “Turn Off the Dark” is “an epic flop as the $65 million show’s high-tech gadgetry went completely awry amid a dull score and baffling script.” It was scored by Bono and the Edge, and its jaw-dropping sets, costumes and cavalcade of infamous and original villains were imagined by Julie Taymor (of the $4.2 billion-grossing “Lion King” theatrical production).

It’s not uncommon for previews to have glitches — actors drop lines, miss cues — and generally audiences are forgiving of that sort of thing. But when a show promises as much visual dazzle as “Turn Off The Dark,” it may have a difficult time avoiding the bad PR stemming from such a trouble-plagued first preview. With a price tag of $65 million plus a weekly running cost of $1 million, its estimated that “Spider-Man: Turn Off the Dark” would need to sell out every performance for the better part of forever (or at least “many months,” says Variety) in order to finally turn a profit. No small feat by Broadway standards.