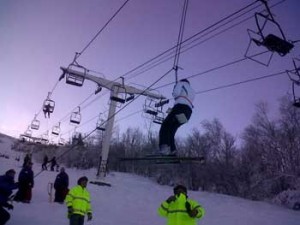 Six people suffered non-life-threatening injuries in a chairlift accident this morning at the Sugarloaf Mountain ski resort in Maine, The accident happened at about 10:30 a.m. when the Spillway East chairlift derailed from the lift’s eighth tower. Five chairs on the lift fell 25 to 30 feet to the ground, the resort said.

The injured skiers were treated and were being transported to a local hospital. At the time of the accident, there were 220 people dangling on the lift in the frigid winds.

The two-passenger lift was manufactured and installed in 1975 and modified in 1983. It carries 162 chairs, each weighing 140 pounds. The lift is powered by a 250-horsepower motor. It is inspected daily and receives weekly, monthly, and yearly maintenance and testing, as well as an annual inspection by the Maine Board of Elevator and Tramway Safety, the resort said.