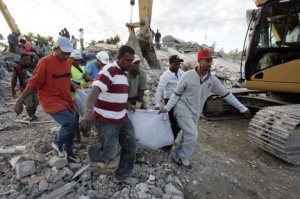 (CNN) — In Jacmel, Haiti, as light rain fell with the darkness Wednesday, Gwenn Goodale Mangine and a group of 35 people prepared to spend their second night sleeping outside on mattresses and cardboard boxes in her driveway.

Everyone is scared to be indoors. It is cold and damp.

The people of Jacmel line the streets, setting tires on fire to light up a town that has been reduced to rubble in many parts and is without power, she said. The flames are all that illuminate what remains of this town on the southern coast of Haiti, about 25 miles from the capital Port-au-Prince, Haiti.

“No one is wanting to go back into their homes, so they were all on the street. It’s still like that,” Mangine, 32, told CNN, speaking using a fleeting Internet connection. “Hundreds of people are all hunkered down for the night passing time and burning tires to light up the night.” 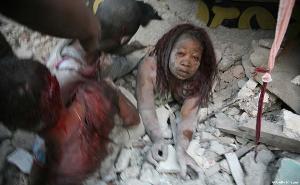 The local airport has now become a refugee camp, she said. Buckets have become toilets. Residents shower using containers filled with water, if they can find it, she said.

Mangine and other residents of the town, with a population of about 34,000, spent Wednesday trying to stock up on supplies, while they remained fearful of continuing aftershocks, looked for survivors and tried to gauge the level destruction.

The U.S. Geological Survey said the perceived shaking from Tuesday’s earthquake near Port-au-Prince would have been very strong in Jacmel, and they would be vulnerable to structural damage.

Mangine and her husband Nick have lived in Jacmel since April 2009 working with the organization “Joy in Hope, ” and are houseparents at a home for orphaned children.

Today, along with others in this town, they frantically searched for loved ones — a task made harder by the power outages and Internet troubles in the wake of the devastation.

In one incident, a staff member’s daughter was nowhere to be found after her home collapsed. They feared the worst, but eventually were elated to find out she was OK.

From the truck, he spotted her in the distance.

“He jumps out of the car as I am still driving and he yells, ‘Manman, Manman!’ [Mommy, mommy],” Mangine said. “He runs and hugs her and starts sobbing. His mother, Rosemary, is clinging to him, and sobbing too.”

They embraced tightly for more than five minutes, Mangine said.

Mangine said she has lived through tropical storms and floods that caused landslides and problems — problems she attributes to poor construction.

Haiti was ‘catastrophe waiting to happen’

At the Hands and Feet Project in Jacmel, Mark Stuart said he believes good construction is what kept their structure largely intact.

“I’m very, very thankful for the quality of the construction here,” Stuart said. “It gives us a hope that we will make it.”

Hope is alive in Jacmel, Mangine said, but the earthquake caused destruction she couldn’t believe.

“This is a whole different scale,” she said. “It’s the most helpless feeling in the world. We’ve just heard story after story of people being trapped in piles of rubble — and there’s no way to dig them out. No big machinery. No tools. There’s nothing. Nothing.”

It lies in stark contrast of what it was more than a day ago.

Before the quake hit, she had just finished English and Creole lessons with a staff member and went to lie down. When the tremors began, she initially dismissed it as a large truck going by.

“But then I realized the house was really shaking. The whole house,” she said. “Things began to fall off the wall. The thought going through my head was that our house was collapsing.”

Her heart began pounding, she said.

“I was pretty sure I wasn’t going to get out in time since I was on the second floor,” she said. “I jumped up quickly and started screaming in English and in Creole for my children to leave the house.”

They counted their blessings when they realized everyone they knew was okay.

Now, Mangine and her group are trying to focus on helping wherever they can.

The city is devastated.

“[It] looks like Jacmel, just more broken. Jacmel was once a beautiful, thriving city. That’s long since passed,” she said. “[But] what happened yesterday tore up a big chunk of history, a big chunk of commerce, and a big chunk of the hearts of the Haitian people.”

Still, as she prepared to sleep outside again with her family, staff and others in the town, Mangine saw a silver lining.

“I still feel optimistic that if anyone can rise above this, it is the people of Haiti,” she said. “There’s a Creole word for when you have to rig something to make do — degaje. In my opinion the ability to degaje is in part what gives this culture the spirit of resiliency that I so admire.”