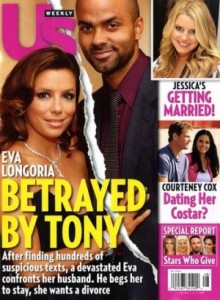 Reports last week claimed the Desperate Housewives actress, Eva Longoria — who recently filed for divorce from husband Tony Parker – has started the adoption process and intends to raise her baby as a single mom.

“She has started the adoption process,” an insider told InTouch Weekly magazine.

“Eva wants a baby more than anything. For months, it’s been all she talked about — she was literally obsessed. For a while, Tony was even coming regularly to the Desperate Housewives set for baby-making time, but then that stopped suddenly.”

But a source close to Eva has spoken out to set the record straight. Eva Longoria isn’t planning to adopt a little baby.

“She’s not focusing on motherhood,” one friend told the New York Daily News, adding that Eva is “spending time with her family, lawyers and her special-needs sister,” Elizabeth Judina.

Meanwhile, it has been claimed Longoria handled her split from Parker “with military precision” — because she’s “obsessed” with the PR game. “Tony and Eva had both agreed they should split,” a source said.