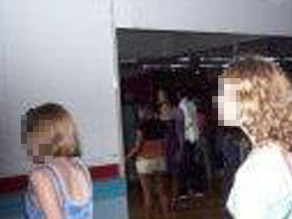 ANTIOCH, California (CNN) — In many respects, Jaycee Dugard and her two daughters lived an unremarkable public life — one that belied the horrifying circumstances that have since made front-page news.

Her two daughters, fathered by 58-year-old Garrido, attended birthday parties and, like many girls their age, shared a love for the TV show “Hannah Montana.”

The media “made it seem like these little girls were living like wolves or jungle kids in the backyard dungeon. Perhaps that’s it, but they didn’t give that visual to me,” said Cheyvonne Molino, who runs an auto wrecking yard with her husband.

Garrido would often bring the girls by the yard, delivering bottles of water on hot days.

The 11-year-old went by the name Angel and the 15-year-old, Starlet.

“They were polite. They were well-mannered,” Molino said.

Two weeks ago, the girls attended a birthday party for Molino’s daughter, who turned 16. Again, they showed no signs of lives lived in turmoil.

They spoke to her about graphic design, business cards and fliers, and describe her as professional, polite and responsive.

The children, however, sometimes stood out.

“They were not dressed like average teenage girls. They were dressed very conservatively,” Karunaratne said.

Another customer, Ben Daughdrill, sometimes corresponded with Dugard when he used the printing service for his junk-hauling business.

“Nothing stood out,” he said. “Obviously, there was some brainwashing going on. That’s all I can think. She had access to a phone and a computer, so obviously something went on that no one knows about.”

Dugard’s real identity was discovered last week and her alleged kidnappers — Garrido, a registered sex offender, and his 55-year-old wife, Nancy — were arrested. They face 29 felony charges, including rape and kidnapping, and both have pleaded not guilty.

Authorities said the Garridos held Dugard and her daughters in a soundproof shed in the couple’s overgrown, littered backyard.

Garrido told Karunaratne that he had a soundproof recording studio in the backyard, said Karunaratne, who described Garrido’s music as “Christian, contemporary” and said some songs “were about love and romance.”

Dugard and her mother and daughters have moved to an undisclosed location as they try to get reacquainted, said Carl Probyn, Dugard’s stepfather. A team of psychologists and several law enforcement officers are with them, he said.

In a related development, authorities in two San Francisco Bay-area cities are investigating whether disappearances dating back to the late 1980s could be connected to Garrido.

Police in Hayward, about 20 miles south of Oakland, say they are investigating whether he is connected to the disappearance of Michaela Garecht, last seen in 1988 at age 9.

Hayward Police Lt. Chris Orrey said there are similarities between Garecht’s disappearance and Dugard’s — similar age and appearance, both were abducted in daylight, and a sketch of a suspect resembles Garrido, she said.

Orrey said there were differences as well, though she would not elaborate. But she said Hayward police have been in contact with Garecht’s family and witnesses since Dugard was found alive last week.

And in Dublin, about 25 miles east of Oakland, police are looking into whether Garrido was connected to the 1989 disappearance of Ilene Misheloff. Ilene was 13 when she was abducted, investigators said.

Investigators announced Saturday that they were looking into whether Garrido may have been behind other unsolved crimes.

Authorities brought cadaver dogs to search the property next door to the Garridos as they tried to determine whether Garrido was connected to a string of unsolved slayings of prostitutes in the 1990s. Several of the women’s bodies were dumped near a park where Garrido worked at the time.

“What we also know is that Phillip Garrido had access to that property,” said Jimmie Lee, spokesman for the Contra Costa Sheriff’s Department. “He used that property, and it looks like he lived on that property in a shed.”

A bone fragment was found during the search, but investigators do not know whether it was from a human or an animal, Lee said. The fragment is being sent to a laboratory for testing. And building inspectors have declared the Garrido home unsafe, due to substandard structures and “junkyard” conditions, he said.