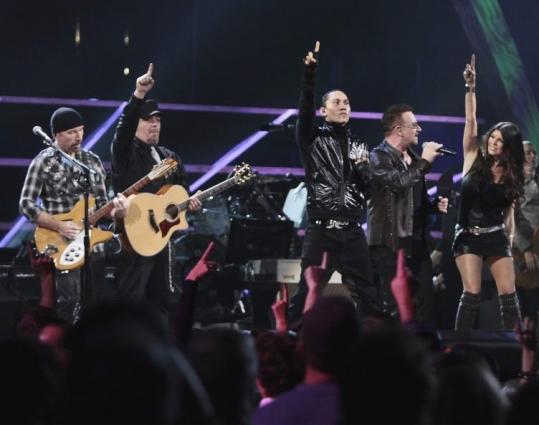 HBO is hosting a special tonight to celebrate the Rock and Roll Hall of Fame’s 25th Anniversary, and the line-up is star-studded. U2, Metallica, Aretha Franklin, Bruce Springsteen & the E Street Band, and other acts each have a segment of the show where they’ll be rocking their music, along with a few tunes by other artists who have inspired their work.

I’m glad to see Bruce and his boys here after hearing they might not perform together anytime soon, but what I’m most psyched to watch is the evening’s unique musical pairings: Stevie Wonder and John Legend are teaming up to perform “The Way You Make Me Feel,” Bruce Springsteen & the E Street Band and Billy Joel have a duet to “New York State of Mind,” and U2, Mick Jagger, and the Black Eyed Peas are coming together for “Gimme Shelter.” Awesome! And those are just a sampling of the many collaborations.

The only downside: the show is four hours long (ugh). I don’t know if I’ll be able to sit through the whole thing without getting fidgety. Still, I’m programming it in my TiVo, so I can watch at my own leisure.

The concert airs at 8 p.m. EST/PST. Will you tune in? Which musical group are you most excited to see perform?

After the holiday, you may be feeling a little sentimental. Time to turn to the Hallmark Channel for some feel-good tears. Andrew McCarthy is the dad, Evan Williams from “Degrassi: The Next Generation’’ is the son, and you are the one getting all teary from their bonding as they travel the country with a home-grown Christmas tree.

Vacations for the wealthy, who, let’s face it, won’t be watching.

The Prisoner Tomorrow at 10 p.m., AMC