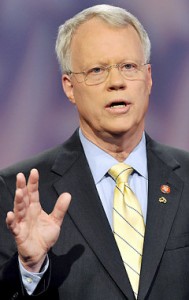 A shocking question was asked at a town hall event held by Rep. Paul Broun (R-Ga.) on Tuesday. According to the article, an audience member asked the congressman, “Who is going to shoot Obama?”

However, rather than confronting the questioner or condemning the question, Broun instead acknowledged “frustration” with Obama, according to the Banner-Herald. The paper reports that Broun responded to the stunning inquiry as follows:

“The thing is, I know there’s a lot of frustration with this president. We’re going to have an election next year. Hopefully, we’ll elect somebody that’s going to be a conservative, limited-government president that will take a smaller, who will sign a bill to repeal and replace Obamacare.”