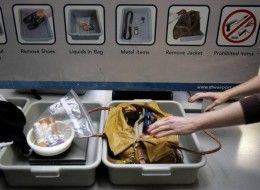 Extra pat-downs before boarding. No getting up for the last hour of the flight. More bomb-sniffing dogs. Airports worldwide tightened security a day after a passenger tried to light some kind of explosive on a flight into Detroit.

The Transportation Security Administration wouldn’t say exactly what it was doing differently on Saturday. It didn’t need to.

Passengers getting off flights from overseas reported being told that they couldn’t get out of their seat for the last hour of their flight. Air Canada also said that during the last hour passengers won’t be allowed access to carry-on baggage or to have any items on their laps.

The extra vigilance came after a man flying from Nigeria to Amsterdam to the U.S. tried to ignite a device just before the plane landed in Detroit on Friday. It compounded delays in a busy holiday travel period marked by snowstorms in the Midwest and heavy rain in the East.

The TSA security directive applied to U.S.-bound flights from overseas, according to a transportation security official who spoke on condition of anonymity because the official was not authorized to speak publicly.

The official said passengers traveling internationally could see increased screening at gates and when they check bags, as well as other measures on flights such as stowing carryons and personal items before the plane lands.

Flight attendants on at least one domestic flight informed passengers of similar rules. Passengers on a flight from New York to Tampa on Saturday morning were told they must remain in their seats and couldn’t have items in their laps, including laptops and pillows.

Passengers on a United Airlines flight from Amsterdam to Washington were not allowed to have anything on their laps during the descent into Dulles, or to open the overhead bins an hour before landing, said Nehmi Klaassen, 32, who made the trip on Saturday.

Klaassen, who lives in Amsterdam, said lines at the airport were “ten times” longer than usual this time.

Jennifer Allen encountered tougher security on her way from Amsterdam to Detroit on Saturday. Her Northwest Airlines flight was on the same route disrupted by the attempted attack a day earlier.

“They patted you down really well,” said Allen, 41, an automotive engineer from Shelby Township, Mich. “It wasn’t just a quick rub, it was a slow pat. They went through everything in your bags, went through the pockets in your pants, the pockets of your coat.”

Sarabjit Dhillon, 35, of Sterling Heights, Mich., was returning to Detroit from a visit to India. Even her three young children got a pat-down.

“They had to open each and every item. They didn’t tell us why they were doing it, they just said the United States wanted them to do it, to check everything,” she said.

“The extra measures apply worldwide on all flights to the U.S. as of now and for an indefinite period,” said Judith Sluiter, spokeswoman for the Dutch National Coordinator for Counterterrorism. Security procedures for other flights remained unchanged, she said.

The big U.S. airlines all declined to talk about the new rules. The new rules don’t affect Southwest Airlines Co. because it flies only domestically, spokesman Paul Flaningan said.

The incident on the flight from Amsterdam is a reminder that securing U.S. airports is only part of the solution, said Elaine Dezenski, who until recently was managing director of the Global Security Initiative at Interpol and also used to work for the U.S. Department of Homeland Security.

“More and more it’s not about what happens in the U.S. airports, it’s what’s happening outside the U.S. and how the system can or cannot be infiltrated,” she said.

At Seattle-Tacoma International Airport, the airport police dogs, which are trained to detect explosives, were out on Saturday. Airport spokesman Perry Cooper said the extra effort was at the request of the TSA.

Passengers flying to the U.S. from London’s Heathrow said they received text messages informing them they could carry only one piece of hand baggage onto the plane.

Italy’s civil aviation authority, ENAC, said the extra measures were requested by the TSA and will initially remain in place for 72 hours.

Amsterdam’s Schiphol Airport is one of Europe’s busiest and tranports passengers from Africa and Asia to North America. It has been testing full body scanners for about a year that allow security staff to see the outline of a passenger and potential weapons beneath their clothes, and intend to roll out a more complete program next year, said airport spokeswoman Mirjam Snoerwang.

Passengers in Brussels, where the EU is based, were advised to reach the airport three hours before departure to allow time for a second security check at the boarding gate.

In Sweden, Denmark and Norway, airport operators said they would apply tougher security checks on flights destined for the U.S., but that they did not plan tighter rules for other flights.

Officials in the Mideast and in India said they were maintaining their current procedures, which they said were already high.

Little was different at the airport in Lagos, Nigeria, where the man’s trip originated. Soldiers impassively stared at those passing into the departure terminal Saturday. Others sat and talked among themselves, loaded rifles tossed over their shoulders.

Passengers moved quickly through security, waiting only for immigration officers to examine passports and visas. A battered X-ray machine quickly passed over suitcases and shoes. Federal airport authority spokesman spokesman Akin Olukunle said the airport had no bomb-sniffing dogs but was considering getting some.