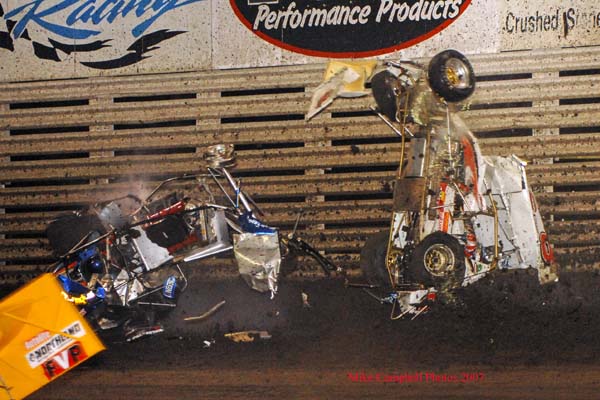 Knoxville, Ia. — Three-time defending Knoxville Nationals champ Donny Schatz caught a boo break Saturday. Instead, the more than 20,000 fans assembled for the 49th Super Clean Knoxville Nationals championship night reserved their ill will and disdain for the wet weather that resulted in a delay of the A-main and B-main races until Sunday night. Hot laps will open the night at 7 p.m.

Heavy rain turned light, tapered off then returned with ferocity after the E- D- and C-mains had been run.

Thus, sprint car racing’s Super Bowl Saturday night program drifted late into the night before a decision to postpone was made.

But the down time dovetailed with dream time for a variety of drivers well-positioned for good runs in the A-main.

Drivers such as Stevie Smith, who will sit on the pole when the main event finally starts.

It’s his first at Nationals, but it didn’t bring extra butterflies — and for good reason.

“We need to focus on (the final lap),” Smith said after Friday’s A-main pole scramble. “We’ll just make some adjustments and try to get the car the best we can. I guess the best will be up to the driver.”

“It’s a long race, and anything can happen,” he added.
Wet weather.

In other words, anything.

“You have to throw out the magnitude of the race,” Schatz said earlier in reference to the keys to success during such a mercurial week. “It is the Knoxville Nationals, but you still put your helmet on and you don’t strap it on any different than you on any other night.”

But Tim Kaeding, who is slated to start fourth in the main event, pledged a win would make him react unlike any other night.

As for the round upon round of Saturday rain. …

“It is what it is,” Steve Kinser, the 12-time champ, told the crowd during the delay. “There’s nothing you can do about Mother Nature.”

Early highlights: The first segment of Saturday’s program did beat the rain, and Bill Rose raced to the E-main win.

After the first rain delay, Kaley Gharst went pole-to-checkered for the D-main victory and transferred to the C-feature along with Toni Lutar and Josh Schneiderman.
Wayne Johnson won the C and moved on to the B-feature along with second-place Billy Alley.

Then the skies opened up again — with lightning as an unwelcome accompaniment, at about 10:20 p.m.

Wreck: Driver Ricky Montgomery flipped and crashed hard in turns one and two of the D-main. Montgomery, who makes a long tow from Lakewood, Colo., to race weekly in the 360 class at the track, was extricated from the car by the safety crew and placed on a backboard and gurney to be transported to Knoxville Area Community Hospital.

He was seen waving his hand as he was put into the ambulance.

Nationals notes: Greg Hodnett of Thomasville, Pa.’s crew won the best dressed award. Hodnett starts 16th in the A-main — his first appearance in the elite group since 2004. … Knoxville regular Brian Brown said he’d been told 15 of the 50 cars locked into the championship night after qualifying were weekly — or frequent — racers at Knoxville. He was right. Dusty Zomer crafted the best effort among locals, earning a 10th-place starting slot in the championship A-main. Terry McCarl lines up 15th in the main event and Brown is slated to start 21st.