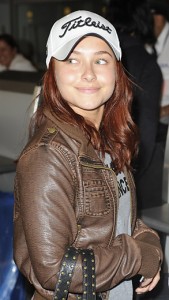 After years of naturally redheaded stars going blond, Lindsay Lohan and Nicole Kidman come to mind, Hayden’s color choice could be the start of a trend.

Hayden Panettiere has a new hair color to go with the new year. The 20-year-old starlet most famous for her role as a blond cheerleader on “Heroes” debuted her new ginger locks for photographers on Wednesday at Miami International Airport as she took a departing flight alongside her 33-year-old rumored boyfriend, Ukrainian professional boxer Wladimir Klitschko. (In addition to winning the attention of a famous TV star, Klitschko is the winner of several worldwide heavyweight titles.)

It remains to be seen how Hayden’s haircolor will affect the flagging ratings of her TV show, or the future of her new relationship. Hayden has one failed May-December romance under her belt: She and Heroes co-star, 32-year-old Milo Ventimiglia ended their yearlong relationship in February of last year.