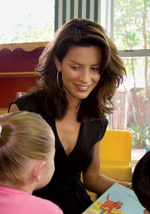 Tony Parker reported had an affair with a teammate’s wife, Erin Barry, the wife of Brent Barry. According to her pal Mario Lopez, Longoria discovered “hundreds of text messages” from another woman “who turned out to be the wife of one of [Parker’s] teammates.”

Lopez did not disclose which member (or former member) of Parker’s San Antonio Spurs was the teammate in question.
Asked about Erin Barry, he neither confirmed nor denied the allegations, saying, “That’s my private life.” He also said, “It’s a difficult time for me and Eva. We have a joint statement and everything else is our private life.” Brent played with Parker from 2004-2008, and is in the middle of a divorce from Erin Barry. Eva Longoria and Tony Parker are in the middle of one, too, as of earlier this afternoon, when the Desperate Housewives star filed the paperwork.