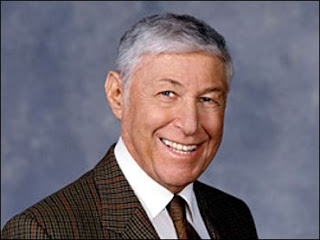 Don Hewitt, 86, the CBS News executive who created “60 Minutes,” transformed television journalism by showing that news programs could generate money and helped make TV an essential part of politics when he produced and directed the first televised debate between U.S. presidential candidates, died Wednesday in Bridgehampton, N.Y., a CBS spokesman said. . He had pancreatic cancer.

The 1960 televised debate between John F. Kennedy and Richard M. Nixon was watched by 70 million Americans. It proved a turning point in the presidential race, in large part because an ailing Nixon rejected Mr. Hewitt’s advice to use professional makeup instead of a cheaper product. Nixon’s sickly appearance while recuperating from a staph infection, in contrast to the tan and vigorous Kennedy, was credited with helping turn the election in Kennedy’s favor.

“From that day on,” Mr. Hewitt later said, “you can’t even think of running for office in the greatest democracy on Earth unless you’ve got the money to buy television time.”

With the debut of “60 Minutes” in 1968, Mr. Hewitt merged elements of news and entertainment and shattered the traditional view that news divisions were run as a public trust with little concern for how much money they made. Mr. Hewitt also was a central voice in the 1990s debates over corporate censorship in journalism when network executives interfered with a “60 Minutes” segment on a tobacco industry whistleblower.

“We never made money before ’60 Minutes,’ ” Kalb said of news and public affairs programs. “That had probably, with the exception of the introduction of the Internet, the most profound impact on television news. It meant that everybody else had to make money, and in the quest for profit, standards began to fall. Then add the Internet and you can see the powerful impact the combination of new technology and news profitability had upon the quality of the product.”

In starting “60 Minutes,” Mr. Hewitt’s key insight was to combine the prestige surrounding the network’s documentary unit with the editorial and visual pacing of an entertainment show. He likened his proposal to a “Life magazine of the air.”

“We could look into Marilyn Monroe’s closet so long as we looked into Robert Oppenheimer’s laboratory, too,” he once wrote, referring to the sexy film star and the atomic scientist. “We could make the news entertaining without compromising our integrity.”

“60 Minutes,” which Mr. Hewitt produced until his retirement in 2004, helped turn correspondents such as Mike Wallace, Diane Sawyer and Morley Safer into instantly recognizable stars. At its boldest, the show popularized a confrontational style of reporting on establishment institutions such as the military and major corporations. At its most controversial, it unleashed reporting techniques such as hidden cameras and ambush journalism, which surprises the interview subject.

The program, with its trademark ticking stopwatch, was one of the highest-rated prime-time series ever, and its weekly viewership reached 40 million at the peak of network TV audiences in the early 1980s. It spawned many imitators and won the top honors of the profession.

Mr. Hewitt, who left college to pursue a journalism career, modeled himself on the hard-boiled, anything-for-a-story reporters portrayed in 1930s Hollywood films such as “The Front Page.” When he joined CBS as an associate director in 1948, radio was still the dominant broadcast medium and television news was little more than a person on camera for 15 minutes reading headlines from a piece of paper.

Mr. Hewitt swept into the early medium of TV with a series of bold editorial and technical ideas. He was a leading champion of location shooting to cover spectacular breaking stories. He introduced cue cards that forced anchors to look directly into the camera, only after his experiment with Braille went nowhere.

At the 1952 national political conventions in Chicago, he created a way of superimposing people’s names under their images on camera. The idea came to him at a diner that had a menu board with rearrangeable letters.

When the waitress came to take his order, he replied, “I’ll have the board.” It cost him $45.

In his memoir “Tell Me a Story,” Mr. Hewitt wrote that his tendency toward dirty tricks did not always suit other CBS officials.

Covering Soviet leader Nikita Khrushchev’s visit to Iowa in 1959, Mr. Hewitt and a colleague hijacked an NBC van with broadcast equipment sitting idle on a roadside and hid the vehicle in a cornfield. Another time, he rented a tugboat on which a news conference was being held so he could boot off the other correspondents, then maneuvered the boat to disrupt satellite signals of the rival networks.

CBS News President Fred Friendly questioned Mr. Hewitt’s “depth and intellectual commitment,” as one former CBS News executive recalled. The two men did not get along, and in 1964 Friendly reassigned Mr. Hewitt from executive producer of Cronkite’s “CBS Evening News” to the network’s documentary unit. Mr. Hewitt said he thought he had been demoted to a sleepy purgatory.

During that period, Mr. Hewitt thought of “60 Minutes” as a way of dividing an hour-long documentary on weighty topics into three shorter segments varying between the serious and the frivolous. He said this approach would cater to his own short attention span.

“60 Minutes” was an immediate favorite of critics but took seven years to establish itself as a ratings leader as network management repeatedly shifted its scheduling position. Mr. Hewitt cast Wallace opposite the easygoing Harry Reasoner as the news show’s first correspondents and described them as “the perfect fit — the guy you love and the guy you love to hate.”

Mr. Hewitt started the show’s “Point/Counterpoint” segment of the 1970s, which let conservative and liberal authors battle out topical subjects. It made for bracing television — even as it was mercilessly satirized on “Saturday Night Live” with Dan Aykroyd and Jane Curtin in the roles. “Jane, you ignorant slut,” became a national catchphrase uttered by Aykroyd’s character.

“60 Minutes” was responsible for airing some of the most riveting moments in television news, including Wallace’s adversarial 1979 interview with Iran’s Ayatollah Ruhollah Khomeini shortly after his followers seized the U.S. Embassy in Tehran and took American hostages.

“60 Minutes” interviewer Steve Kroft’s pointed questioning in 1992 of then-presidential candidate Bill Clinton over alleged extramarital affairs that threatened his political ambitions — with Clinton’s wife, Hillary, sitting by his side — shaped how many saw Bill Clinton for years to come.

Before filming the segment, Mr. Hewitt leaned down to the future president with advice: “I think, at some point, you should be as candid as you know how to be, and from then on, you say, ‘I said it on “60 Minutes,” and if you want to know what I think or have said on the subject, then go get a tape and run it again. I’ve said it all.’ ”

Donald Hewitt was born Dec. 14, 1922, in Manhattan and raised in New Rochelle, N.Y. His father was an advertising salesman for the Hearst newspaper company. After nearly flunking out of New York University in 1942, he left school and used his father’s connections to find work briefly as a $15-a-week copy boy at the New York Herald Tribune.

He wrote for the Army publication Stars and Stripes later in World War II and said he hoped his experience would lead to a full-time Herald Tribune reporting job. He was bitterly disappointed when it didn’t, and he was working as a wire service photo editor when a friend told him of an opening at CBS News that required “picture experience.”

As a young director, he worked on the public affairs program “See It Now” hosted by Murrow as well as the evening newscast. He advanced rapidly at the network, later telling the New Yorker: “I am not an intellectual. I operate by my guts and my fingertips. Television is successful when you have a gut feeling about a show. It’s not what your eyes and your ears digest that counts. It’s the impact of your gut. I have a kind of sixth sense for seeing a piece of film and knowing what’s wrong about it and what’s right.”

At “60 Minutes,” Mr. Hewitt was at times thrust into the public spotlight, including a controversy over not promoting women. In 1979, he offered People magazine an explanation of why the show had so few female producers: “A lot of things get talked about in the men’s room standing at the urinals, which puts them at a disadvantage.”

The profitability of “60 Minutes” had long ensured Mr. Hewitt editorial independence, but he grew increasingly frustrated by what he considered painful cost-cutting measures and setbacks in editorial freedom under new CBS chief executive Laurence Tisch in the 1980s and 1990s.

At one point, he sent word that he, Wallace, Rather and others wanted to pool their money and buy the news division. The offer was declined, but Mr. Hewitt stayed on, largely, he said, because of his enormous salary.

What is often seen as the greatest blow to Mr. Hewitt and his show’s prestige was the network’s interference with a “60 Minutes” report about a tobacco industry whistleblower who said he could prove cigarette executives were lying when they publicly declared they knew of no evidence to prove the addictive nature of nicotine.

When the whistleblower, Jeffrey S. Wigand, came to Mr. Hewitt’s attention in 1994, CBS was in the middle of a takeover by the conglomerate Westinghouse, and the network feared that Wigand’s confidentiality agreement with his old employer would make CBS susceptible to a multibillion-dollar lawsuit.

In the end, “60 Minutes” aired in 1995 only a small portion of Wigand’s interview and hid his identity and face. Wallace, who conducted the interview, noted the limitations imposed by CBS management.

Segment producer Lowell Bergman, a respected investigative reporter, was furious about what he regarded as a cowardly act by the network and leaked word of what he called “self-censorship in major media” to media outlets. “60 Minutes” broadcast a fuller Wigand interview many months later, after a deposition Wigand had given in a tobacco lawsuit was reported in the Wall Street Journal.

Communications scholar Richard Campbell, author of a book about “60 Minutes,” told the Baltimore Sun that “to have the major investigative journalism symbol of our times back down from big business was a real low point in television news history.”

The controversy over Wigand was revived in the 1999 Hollywood film “The Insider,” in which Bergman was portrayed as a lonely crusader, while Mr. Hewitt and Wallace were shown as unduly deferential to CBS brass.

Mr. Hewitt frequently impugned the film and Bergman. He told The Washington Post: “This was a corporate blunder. Nobody here at ’60 Minutes’ was in agreement with the corporation. Short of a bunch of guerrillas with guns taking over the CBS transmitters, there was no way for us to put it on the air the first time. CBS owns the means of getting that story to the public.”

He later said Benjamin C. Bradlee, the former executive editor of The Post, advised him to “go back to the dugout, sit down and shut up.” Mr. Hewitt called it “the best advice anybody ever gave me.”

He was married three times. He and his first wife, Mary Weaver, divorced in 1962. His second marriage, to Frankie Childers, who organized the revival of Ford’s Theatre into a cultural institution, also ended in divorce. Since 1979, he had been married to Marilyn Berger, a former Post and network television reporter.

He is survived by Berger, along with two sons from his first marriage and two daughters from his second marriage.