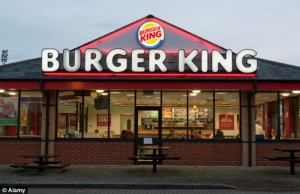 The fast food chain, which has more than 500 UK outlets, had earlier given a series of ‘absolute assurances’ that its products were not involved.

However, new tests have revealed these guarantees were incorrect in a revelation that threatens to destroy the trust of customers.

Last month, it was discovered that horse meat had been found in burgers for sale in the United Kingdom and Ireland. Several stores had meat that tested positive for horse DNA: Tesco, Dunnes Stores, Lidl, Aldi and Iceland. Initially, the mystery was how the horse meat was found in the burgers when the plants that processed them do not process meat from horses.

Blocks of frozen meat from a non-approved supplier in Poland turned out to be the culprit. The imported beef contained minute amounts of horse meat that made their way into burgers, including those sold at Burger King.

A spokesman said: ‘Customers are our absolute priority. This is why we immediately withdrew these products until such a time that we could verify that there was no risk to our customers.

‘We are deeply angry and feel let down by our supplier and we are pursuing more tests until we are certain that we understand how the production line was contaminated.

‘We will continue to maintain active scrutiny across our supply lines, and we assure our customers their health and safety is our number one priority.’