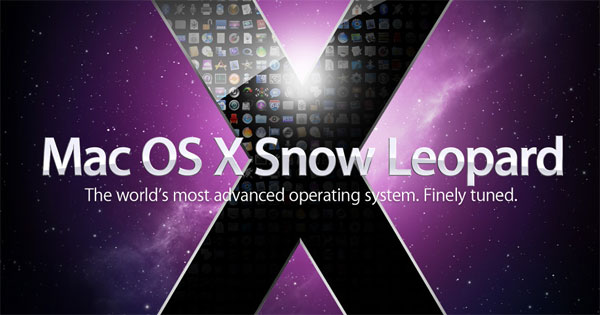 New operating system will be faster, but won’t run on older Macs

NEW YORK – While Microsoft Corp. prepares to release the next incarnation of Windows on Oct. 22, Apple Inc. is cutting ahead, launching a new version of its operating system for Mac computers on Friday.

(Msnbc.com is a joint venture between Microsoft and NBC Universal.)

Apple’s new Snow Leopard software isn’t as big of a step forward from its predecessor as Windows 7 will be from Windows Vista. The most important changes in the Apple operating system are under the hood, allowing software developers to rewrite their programs to run much faster.

Snow Leopard is a relatively cheap upgrade, costing $29 for an individual user who has Leopard, the previous operating system. A “family pack” for five users costs $49.

For Mac owners using the older Tiger operating system, switching to Snow Leopard costs $169, or $229 for a family pack. That “box set” includes the latest iLife and iWork software for such tasks as movie editing, photo organizing and word processing. Buying the DVD is the only upgrade option for consumers — you can’t download the software.

Dropping a hint
What’s the catch? Well, part of the reason Snow Leopard can promise faster, better applications is that it’s designed for Macs with Intel chips, which Apple started using in early 2006. It won’t run on older Macs with the previous PowerPC family of chips. The launch of the new operating system is a hint to get a new computer.

In an Apple’s demonstration of the software to The Associated Press, these were some of the most obvious changes that stood out in Snow Leopard:

* The built-in e-mail, calendar and address book applications will support Microsoft Exchange servers, the kind used by most companies. That means it will be easier to get company e-mail without using dedicated programs like Entourage or Outlook, which Microsoft is releasing for Macs late next year. However, Snow Leopard supports only the most recent release of Exchange.
* Moving the mouse cursor over a program icon in the “dock” at the bottom of the screen reveals all the windows open in that program, tiled side by side. This is an extension of the “expose” feature, which shows all windows in all programs side by side.
* Right-clicking in a window should bring up more relevant choices, bringing this function closer to its Windows equivalent.
* The new standard version of the QuickTime video-playing software will now convert clips for playing on iPhones or iPods, or upload them to YouTube. You will also be able to trim clips. Previously, you had to buy QuickTime Pro to convert videos or fire up the more time-consuming iMovie.
* You can make the file thumbnails even bigger, giving you a better idea of the contents of your hard drive at glance.
* The operating system is more compact, freeing about 7 gigabytes of hard drive space previously claimed by Leopard.
* Ejecting disks should be easier. Sometimes, Macs won’t let you eject a disk or disconnect a drive because the operating system believes it’s reading or writing to it. Apple says Snow Leopard will be better about freeing up the disk, or if it can’t, it will give a reason.
* Web browsing and image and document previews should be noticeably faster. This is because more of the software now processes data in 64-bit chunks, twice as big as before. Other applications should benefit from this change as well, once developers start writing them in 64-bit versions.
* Developers will also be helped by a new system called Grand Central Dispatch, which makes it easier to take advantage of the multiple “cores” in today’s processors, boosting the speed of heavy-duty applications like video editing. It will also be easier to take advantage of more system memory.

Lastly, Apple is making it easier to tap into what can be the most powerful computing engine in a desktop PC: the graphics chip. While the central processing unit does most of the heavy lifting, the graphics chip is mostly called upon to generate screen images. Developers will now be able to expand the uses of the graphics chip, which could make for smarter enemies in video games and more realistic simulations of real-life objects.

Payoffs later
So how does Snow Leopard compare to Windows 7? Snow Leopard’s benefits will be most apparent down the road, while Windows 7 promises more of an immediate payoff.

Windows 7 combines a bigger revamping of the user interface of Microsoft’s last effort, Vista, with a series of smaller under-the-hood changes. It even can work on many older PCs — in fact, Windows 7 is supposed to run better on modest hardware than Vista did.

Apple’s share of the U.S. personal-computer market nearly tripled from 2004 to 2008 but hasn’t gone up significantly since then, and now stands at around 8.5 percent, according to IDC. So Apple could use a fresh reason for buyers to get excited about Macs.

Snow Leopard is unlikely to provide that. People already have a high opinion of Apple’s software. What holds them back from switching from Windows is still the relatively high price and limited selection of Macs and third-party software. Coming in as the underdog in the public-perception contest, Microsoft has more to gain from these software revamps.

For most Mac users, Snow Leopard will likely be a no-brainer upgrade, given the low price. But early upgraders often face minor bugs and installation problems, so unless you’re dying for one of the new features, waiting a month or so is a safer course.

© 2009 The Associated Press. All rights reserved. This material may not be published, broadcast, rewritten or redistributed.