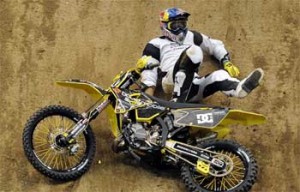 Thursday at the X Games 17 in downtown Los Angeles, the action sports star failed again and, worse, broke his right foot and ankle in the process, which puts into question his participation in other events this weekend.

His injury occurred during the Moto X Best Trick final when Pastrana crash-landed on a dirt ramp in Staples Center after trying to flip and spin his dirt bike 720 degrees in the air, a trick he calls a “toilet paper roll.”

It’s unclear if he’ll be able to participate in Moto X Freestyle on Friday night or in Sunday’s Rally Car RallyCross event.