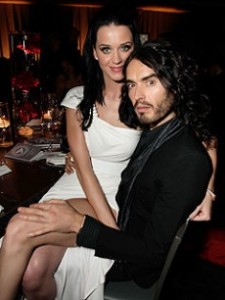 Over the weekend, Russell Brand and Katy Perry tied the knot in India — and the new couple wanted to let all of their Twitter friends know. “We did!” read tweets from Brand and Perry’s accounts, accompanied by a photo of the names Russell and Katy.

The traditional Hindu wedding took place at luxury property within a wild tiger sanctuary, according to the Huffington Post.

The ceremony was the highlight of a six-day celebration, which included a Bollywood-themed party on Friday night. The couple, who met at the 2009 MTV Video Music Awards, got engaged in December ’09 while vacationing in India, after less than five months of dating.

A source tells Us Magazine Katy Perry’s Wedding dress was dove gray and had lace sleeves.

Us previously reported that Perry, who turns 26 Monday, planned to have a rotating bridal wardrobe from designers Zuhair Murad and Donna Mizani for the private and spiritual ceremony, which was attended by 80 or so of the couples’ closest family and friends and was performed by a Christian minister.

Hours after the wedding, a rep for Perry told Us the singer and her husband “are overjoyed to confirm that they were pronounced Mr. and Mrs. Brand.”

Coverage of the event was sold to a London news outlet; no other journalists were allowed entry. Now, we should wait for Katy Perry’s Wedding photos. Stay tuned.