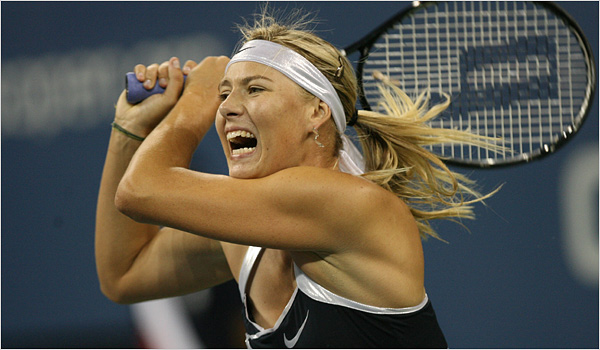 Maria Sharapova made twice as many unforced errors as Tsvetana Pironkova (22-11), but dominated on winners, 29-6.

Maria Sharapova has established a reputation for talent and glamour. As she made a triumphant return to the United States Open on Tuesday night, she demonstrated that her tenacity is intact as well.

Playing in her first Open since 2007, Sharapova showed New York fans her new clothing line and her new serve while dismissing Tsvetana Pironkova of Bulgaria, 6-3, 6-0, in a workmanlike 1 hour 13 minutes.

Sharapova, a former champion seeded 29th after missing nine months with a shoulder injury, advanced to the second round. She will play Christina McHale, a 17-year-old wild card from Englewood Cliffs, N.J.

Wearing a navy blue dress she designed, with a silver lamé headband, Sharapova showed how hard she has worked to get back to where she loves to be, under the lights on center court at Arthur Ashe Stadium.

The last time Sharapova played there was 2007, when she was upset by Agnieszka Radwanska. Since then, Sharapova had surgery on her shoulder and was forced to adapt some of the mechanical aspects of her game.

After starting 2008 with such promise by winning the Australian Open and sweeping her first 18 matches, Sharapova had built a 32-4 record before the pain became unbearable. It forced her to skip the United States Open, which she won in 2006.

She opted for surgery in October 2008, which was performed by Dr. David Altchek, a well-known orthopedic surgeon who has operated on dozens of major league baseball players.

The procedure repaired a partly torn rotator cuff and tightened a loose capsule in her right shoulder. But even after the surgery, she was still unable to go through her normal serving motion. Part of her rehabilitation involved learning a new, more compact serve.

She now has a lower toss, with her right arm moving up more vertically. It is as if she is trying to push her arm up, rather than having it come around from behind like a windmill the way it did for the first 15 years of her tennis life. It has been a difficult process as she has had to relearn an aspect of her game that was always a strength.

After missing nine months of the tour, Sharapova has gingerly waded back into competition. In May she made it to the quarterfinals at Warsaw and the French Open, beating Nadia Petrova and Li Na along the way. She lost in the second round at Wimbledon, a tournament she won in 2004, but last month she reached the semifinals at Los Angeles and the final in Toronto, where Elena Dementieva beat her in straight sets.

Meanwhile, on Court 11, another player recovering from major surgery made a comeback. Taylor Dent made his first appearance at the Open in four years with a 4-6, 7-6 (0), 6-3, 7-5 victory over Feliciano López.

When López hit a backhand into the net on match point, Dent took a deep breath, held his fists up near his face and screamed in exultation.

Dent had been out of action for more than two years with back problems that required three operations, the most recent in September 2007. He had minor surgery in 2006 that did not work, so he underwent spinal fusion surgery in March 2007. That did not work either, so he had the third procedure.

He entered the Australian Open in January and lost to Amer Delic in five sets. But he did well at Miami, reaching the fourth round before losing to Roger Federer.

After dropping the first set Tuesday, Dent swept the next two, then held on in the fourth set to win on his serve.