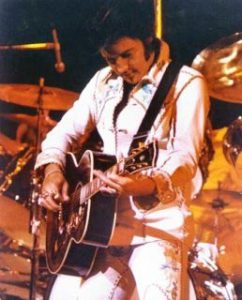 Elvis heads for the bathroom carrying the book, Frank Adams’ The Scientific Search for the Face of Jesus. While on his way, Ginger calls out “Don’t fall asleep in there.” “Okay, I won’t,” are Elvis’ last words.

Elvis Presley suddenly dropped in the bathroom of his Graceland mansion on the afternoon of August 16, 1977. He was rushed to Baptist Memorial Hospital in Memphis, Tennessee, pronounced dead, then shipped to the morgue and autopsied the same afternoon.

Elvis died of natural causes, heart. Dr. Jerry also said that, “there was no indication of any drug abuse of any kind”.

However, toxicology results soon identified several pharmaceutical drugs in Elvis’s system with codeine being ten times the therapeutic level. This started accusations of a cover-up and suggesting conspiracy theories of a sinister criminal act.

Pushing 40 years after, modern medicine and forensics took a new look at the Presley case facts and indicated that something entirely different from a heart attack or a drug overdose really killed the King of Rock & Roll.

Hindsight being twenty-twenty, let’s first look at how death investigations should be conducted.

Coroners are the judge of death and it’s their responsibility to establish five main facts surrounding a death. (Coroners are not to assign blame.) In the Presley case, the facts determined at the time were:

There’s a distinct difference between Cause of Death and Means of Death. Cause is the actual event. Means is the method in which death happened. Examples are cause being a ruptured aorta with means being a motor vehicle crash, or cause being massive cerebral interruption with means being gunshot wound to the head.

Once the facts are known, it’s the coroner’s duty to classify the Manner of Death. There are five universal classifications:

Elvis Presley’s death was ruled a natural event — thought at the time as being an acute cardiac event from existing cardiovascular disease. If the coroner determined Elvis died from a drug overdose, the ruling would have been accidental. No one ever claimed it was suicide or homicide.

Elvis was found on his bathroom floor, face down in front of the toilet. It was apparent he’d instantly collapsed from a sitting position and there was no sign of a distress struggle or attempt to summon help.

When the paramedics arrived, he was cold, blue, and had no vital signs. Rigor mortis had not set in so he’d probably expired within the hour. He was transported by ambulance to Baptist Memorial Hospital where a vain attempt at resuscitation occurred because “he was Elvis”.

He was declared dead at 3:16 p.m. and was shipped to the morgue where an autopsy was promptly performed.

There was no suggestion of suicide or foul play so there was no police investigation. The scene wasn’t photographed, nor preserved, and there was no accounting for what medications or other drugs might have been present at Graceland.

Elvis was in terrible health. His weight was estimated at 350 pounds and he was virtually non-functional at the end, being mostly bed-ridden and requiring permanent nursing care.

He suffered from an enlarged heart which was twice the size of normal and showed evidence of advanced cardiovascular disease in his coronary vessels, aorta, and cerebral arteries — certainly more advanced than a normal 42-year-old would be. His lungs showed signs of emphysema, although he’d never smoked, and his bowel was found to be twice the length of normal with an impacted stool estimated to be four months old.

Elvis also suffered from hypogammaglobulinemia which is a genetic immune disorder, as well as showed evidence of an autoimmune inflammatory disorder.

Toxicology tested positive for 10 separate prescription medications but showed negative for illicit drugs and alcohol. The only alarming pharmaceutical indicator, on its own, was codeine at 10 times the prescribed manner but not in lethal range.

Dr. Torrent was convinced there were other contributing factors leading to Elvis’s death. In preparation for Doctor Nick’s trial, Dr. Torrent had access to all of Elvis Presley’s medical records, including the autopsy and toxicology reports.

Incidentally, the autopsy and toxicology reports are the property of the Presley estate and are sealed from public view until 2027 — 50 years after Elvis’s death.

Dr. Torrent was intrigued by the sudden change in Elvis starting in 1967 and discovered that while in Los Angeles filming the movie Clambake, Elvis tripped over an electrical cord, fell, and cracked his head on the edge of a porcelain bathtub. Elvis was knocked unconscious and had to be hospitalized.

The last film Elvis saw at the cinema was The Spy Who Loved Me (1977).

The book Elvis was reading at the time of his death was “The Scientific Search for the Face of Jesus” by Frank O. Adams, (Psychical Aid Foundation, USA, 1972).

Elvis died with about $5 million in his bank account.

Blue Eyes Crying In The Rain

Elvis Presley´s last words to anyone outside Graceland before death

His last words to anyone outside of Graceland were to his first cousin and assistant, Billy Smith, over the phone. “Billy, son,” he said, referring to his upcoming series of concerts, “this is gonna be my best tour ever.”

Elvis was buried twice. Elvis was originally buried next to his mother, Gladys, at the Forest Hill Cemetery in Memphis. Shortly after, several young men attempted to steal his body. So Vernon, Elvis’ dad, decided to move both bodies to the grounds of Graceland. The bodies of Elvis and his mother were moved to Graceland on 2th October of 1977.

Elvis was buried in a white suit that his father had given him and TCB lighting bolt ring on his finger.