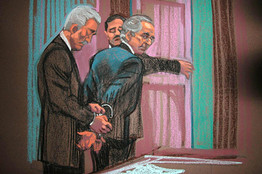 What could be more insolent than the Bernie Madoff fraud? How about a bunch of books that promise the inside scoop on the con artist’s scam but fail to deliver the goods?

Audacious as it seems, that’s the proposition the publishing industry and a bunch of itchy-trigger-finger writers would offer us, with no fewer than six new titles about the Madoff fraud either in bookstores or destined for the shelves in the coming weeks.There is “Betrayal: The Life and Times of Bernie Madoff,” “Too Good To Be True: The Rise and Fall of Bernie Madoff,” “Madoff With the Money,” “Madoff: Corruption, Deceit and the Making of the World’s Most Notorious Ponzi Scheme” “Catastrophe: The Story of Bernard L. Madoff, The Man Who Swindled the World.”

And, of course, “Madoff’s Other Secret: Love, Money, Bernie and Me.”

No one would argue Mr. Madoff’s value as a P.T. Barnum figure. His villainy makes him an easy target for mocking, humiliation and the prurient glimpses with which the raft of Madoff books tantalize us.

Unfortunately, these books can’t deliver on the big questions still swirling around the case. How can they? The investigation into Mr. Madoff’s scheme is little more than half a year old. The most crucial evidence is still under wraps as prosecutors put together cases against Mr. Madoff’s co-conspirators.

Who, other than Mr. Madoff’s right-hand man, Frank DiPascali, knowingly aided the fraud? What was Ruth Madoff’s role, if any? What was his brother and chief compliance officer, Peter Madoff’s, role? How about the sons who worked in the Madoff empire but didn’t have a hint of the colossal scam until their father confessed to them in December 2008? Did the marriage of Peter’s daughter, Shana Madoff, to the Securities and Exchange Commission official who was supposed to be watching the company have any role in perpetuating the fraud?

Where is all the money?

Many of these books will likely be in the discount bin by the time the average citizen finds out. We’re just going to have to wait.

In the meantime, the best chapters on the Madoff case are coming from the U.S. District Attorney’s Office for the Southern District of New York.

In Mr. DiPascali’s 47-page plea agreement filed Aug. 11, we learn how Mr. Madoff directed Mr. DiPascali to create “a phony computer trading ‘platform’ for the purpose of making it falsely appear that (Madoff’s firm) executed securities transactions” and then “practiced using the phony trading platform in preparation for deceiving the SEC and anyone else who demanded evidence of their trading activity by purporting to demonstrate the system in action.”

If not written in the breathless style favored by the summer potboiler crowd, it is a compelling and illuminating read nonetheless. Plus, the frequent use of the phrase “co-conspirators” gives the sense there is much more to come.

This isn’t to say the Madoff books don’t bring anything to the discussion.

Erin Arvedlund’s thoroughly reported “Too Good To Be True” is about Mr. Madoff’s rise on Wall Street and the history of his firm, including the legitimate market-making arm. It also has plenty of detail about the suspicions about his investment-management business. Ms. Arvedlund got those suspicions into print long before Mr. Madoff surrendered to authorities — she wrote an article raising doubts about his returns in 2001.

None of the Madoff books hold back in criticizing Mr. Madoff. They paint him as a terrible boss, a slimy student, a lying friend, megalomaniac and all-around jerk.

Former Hadassah Chief Financial Officer Sheryl Weinstein’s “Madoff’s Other Secret” details her alleged affair with the evil one. It’s not due out until the end of August, but pre-publication copies are already giving the tabloids plenty of grist in a slow summer month. Her tell-all reveals two until-now unknown facts about Mr. Madoff: that he was not well endowed and he was a fantastic lover.

Should an audience be willing to pay $23 to delve even deeper into this untold story by buying the book, let’s hope they get what they pay for — and keep it to themselves.

As for the rest, you can’t help but wonder if Mr. Madoff is sitting in his jail cell in North Carolina smirking at the irony. These authors have finally found a way to profit from the Madoff name, and this time it’s all legitimate, as long as the books’ buyers have learned the lesson of the ruse: books, like get-rich-quick fund managers, don’t always keep their promises.