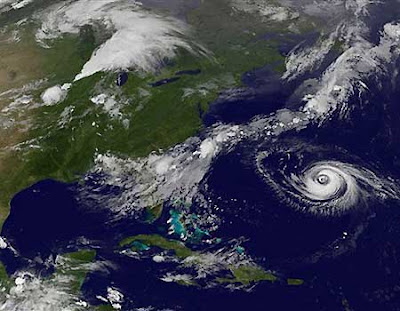 MIAMI – Bermuda was under a hurricane watch Thursday as Hurricane Bill approached, slightly weakened but with winds still near 120 mph, while dangerous waves and riptides were likely along most of the eastern U.S. coast over the weekend.

Bill weakened to a Category 3 storm early Thursday, but forecasters cautioned warm Atlantic waters could feed its growth back to Category 4 by Friday, meaning winds of 131 mph to 155 mph.

“It’s moving over waters of 84, 85 degrees Fahrenheit, which could provide some fuel to it. We still think it could restrengthen back into a Category 4. The environmental conditions appear to be right,” said Eric Blake, a hurricane specialist at the National Hurricane Center.

The watch for Bermuda means hurricane winds could strike within 36 hours. It comes after former U.S. President Bill Clinton and his wife, Secretary of State Hillary Rodham Clinton, arrived in Bermuda on Wednesday for a 3- or 4-day getaway.

The government urged islanders to secure boats and finish other storm preparations by Friday afternoon. Officials put up warning signs at beaches along the south shore because of large swells and dangerous rip currents expected ahead of the storm. Home Affairs Minister Walter Roban urged people not to swim until further notice.

“At this point, it’s fair to say that one can expect some disruption — but to what extent, remains to be seen,” he said.

The storm is expected to pass between Bermuda and the U.S. eastern coast on Saturday. Forecasters warned large swells generated by the hurricane could cause extremely dangerous surf and rip currents at beaches on one of the final weekends of summer.

“Those swells are known to be deadly,” Blake said. “It’s just going to be very dangerous this weekend.”

The center’s five-day track showed Bill staying well out to sea off the southern and northern U.S. coast. Bill was forecast to inch closer to shore as it moves north but only come close to landfall in Canada’s Maritime provinces before veering back out into the North Atlantic.

As of 11 a.m. Thursday, Bill was centered about 380 miles north of the Leeward Islands and about 695 miles south-southeast of Bermuda. The hurricane was moving northwest near 18 mph.

The revised prediction was for three to six hurricanes, with one or two becoming major storms with winds over 110 mph. Researchers at Colorado State University have also lowered their Atlantic season forecast to four hurricanes, two of them major.